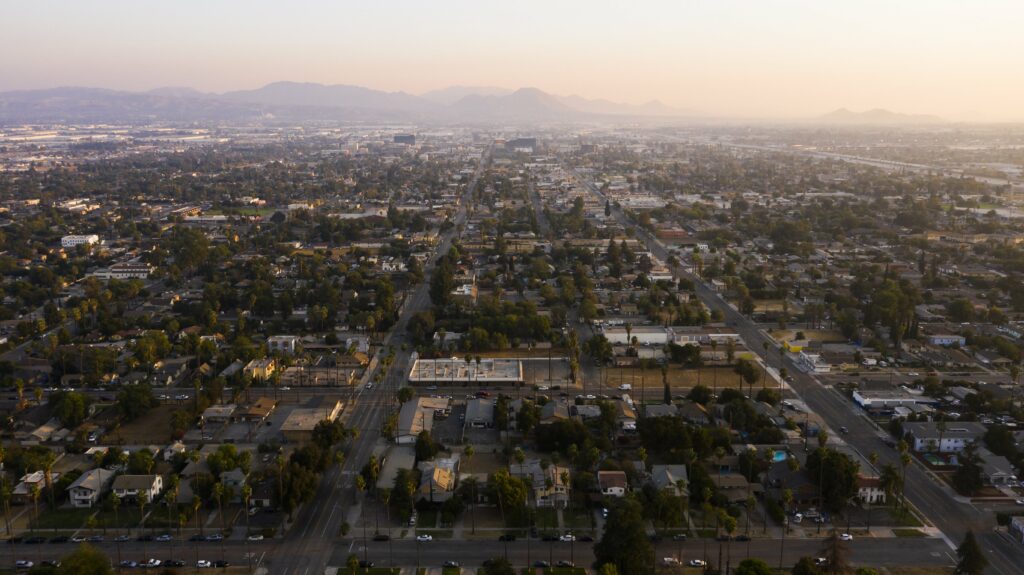 The Inland Region has a long history of domination by large corporate interests who have promised big and delivered little - all the while relying upon the highly-undervalued labor of Black, Latinx, Asian and Pacific Islander, and indigenous groups, as well as depleting the environment. This has included ranchers, agriculture, real estate developers, and prisons. The logistics industry is the latest such behemoth, going often town-to-town touting the contributions of warehouse and distribution centers under Walmart and Amazon’s control. The Inland Region became particularly valued for its location at the juncture of freeways and train freight from the Port of Long Beach/Los Angeles - the busiest in the US thanks to imports from China and the Pacific - and highways leading throughout the US. But in exchange for billions in profit from controlling goods flows, companies like Amazon have provided local communities little and exploited with abandon - detailed more comprehensively in the Labor and Land sections.

What is critical here is understanding the ways contemporary logistics corporations co-opted municipal and regional power structures.  Los Angeles proved more expensive, and residents and companies pushed back on creating warehouse towns alone, and with it bringing truck traffic and more. Port boosters for the greater LA region set their sights on the Inland Region as expendable and with space for millions in square feet, and local municipalities were co-opted over time with big promises by corporations like Wal-Mart. And they came at a time of significant distress, when continued manufacturing movement overseas and the Great Recession had unemployment at all-time lows. Logistics giants have found their ways into tables meant in fact to grapple with long-term, sustainable and equitable economic development. They have also co-opted local infrastructure. Announced in May 2020, SB Airport Communities, a coalition of labor, environmental justice and other community groups, have challenged the development of Amazon’s newest location at the San Bernardino International Airport and are seeking guarantees for good jobs for local residents and mitigation against air and noise pollution that the development will cause. Ultimately, Amazon wielded its power to push the San Bernardino International Airport to approve a 750,000 sq. ft. air cargo logistics Eastgate that would solely benefit the logistics giant.

At the state level, such corporations have been major anchors in efforts to halt closing tax loopholes for corporations in Proposition 13 (1973) property tax system (a measure proposed in 2020). Put bluntly, an interviewee explained, “The warehouse economy has been left to the vulgarities of the market. The market controls everything, and politicians bend over backwards hoping for more jobs and tax revenue and growth.”